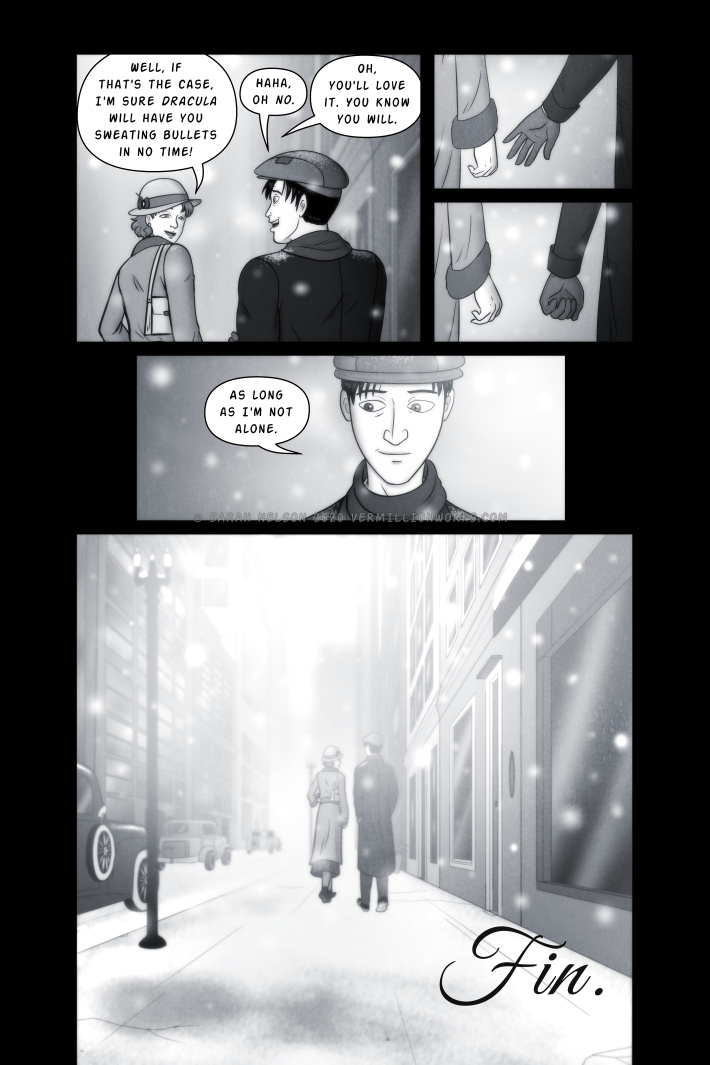 Ending song.
Think of a miser without any gold
And picture a black sheep without any fold
Now I am nothing, my story is told
That’s me without you

It’s done…the whole comic. Wow. Just wow.
Also, I ended with what I think is probably the best city shot I’ve ever done, and the shot of Daniel is cute, too. Nice art feels to end this with. ^_^

So, some thoughts and info about what’s next are below…

But first, where you can keep updated about future works from me:
Twitter
Patreon
Tumblr
Instagram
Deviantart


Daniel’s End
Daniel started as something of a gamble project. At the time, vampire stories with a more classic feel were lacking (in my opinion) and I was so ACHING for such a story to exist that I decided to make it myself, even though I’d be dropping another vampire comic I had clung to for years but had lost passion for, and was beating myself up about that. But I’m glad I went with my gut.

I intended for Daniel to be “short”, but ultimately underestimated the size of the story I had thought up, but I’m glad I didn’t cut corners because I’m very pleased with what I came up with. Daniel has also made me realize a lot of my strengths and weaknesses as a writer and artist.

I didn’t want this to be like my previous webcomics and aimed to have an ending in mind right from the beginning (even if it was tweaked through time), but webcomics and life being what they are, I couldn’t say I knew for SURE if I would finish this, but here we are. I did it and it feels good. Whatever happens with Daniel at this point, I’m glad it’s complete and there for all to enjoy.

Thank you so much to all my readers, patrons (y’all helped me out SOOO much), friends, friendly acquaintances, my family for going along with my shit, fellow artists/webcomickers, and for those who took the time to write me complimenting the comic and telling me what it meant to them. You all really made me feel like this scary little vampire story was something special and helped me to keep chugging along all this time. Love you! ❤️

The first thing I’m doing now is taking a decent sized break from all art-making. As many of you know, I’ve suffered from physical issues (my arms, neck and shoulders get sore often and unbelievably stiff) from drawing nonstop, so I want to take a good rest to try and see if I can considerably recoop before jumping into a whole lot more projects. I also think it’ll be nice for me mentally since comics are all I’ve thought about for many, many years. XP

I already kinda started a break after finishing the last page, so it began halfway through this month, but basically I’m aiming to make the break like 2ish months or a bit longer if I feel I must. I assume I’m going to start updating Succubus again either early or mid July, and even that is still only going to remain one update a month for a while. Why? Because I want to EASE back into things as I’m going to have a ton of stuff to do, and not just starting new comics. I need to fix up vermillionworks.com and eventually make a new site for my next “for all” comic, too. Just…lots of rough stuff. x_x

Besides Succubus’ return, I’m considering making The Devil’s Trill my next comic that’ll be for all to view. (You may have seen concept art and sketches for it on and off. It’ll be a horror romance set in Victorian times.) However, I don’t know FOR SURE that this will be it as I’ve gotten a few new ideas lately and want to ponder my options a little before dedicating all of my brain power to one story (besides Succubus). I’ll try to remember to announce it here but if not, I have a Twitter, Patreon, Tumblr, Instagram and Deviantart where I keep people pretty updated.

I should also clarify this: I am never going to make another comic as long as Daniel again. If I keep making 10+ chapter comics that take 9ish years to complete, then well…I’m not going to get a whole lot of comics made, at least. XD All of my future ones are going to be shortish, ranging from a handful of pages to AT MOST 4-5 chapters…and even 4-5 is pushing it for me.

Whatever comic I end up doing next, patrons at the Patreon will probably get the first pages of it as I build up a bit of a buffer to have on hand.

What about printed Daniel?!

Hooo boy, well y’all know I want Daniel to be in book form, and I want to start looking into it after my break little by little (another reason why I don’t want to rush into too much new comic work RIGHT after the break), but I kind of left behind format, dpi, and text issues to work through with the early chapters, and even if I get THAT all done and figured out without much problems, there’s just a lot to consider when it comes to actual printing, like what methods would be best for me.

I won’t lie, it probably still won’t be soon, but I’m going to try and see what’s possible, even if I end up just putting out a Print On Demand version later on.

$5+ patrons are going to get the entire HD version of Daniel soon! And I’m also planning to release the standard web version of Daniel FREE TO ALL in some compact form. Either PDF or just a big ol’ ZIP file or something. Just something extra for people who want to read through the comic but don’t really like the idea of going through my site’s archives every time.

Also, I’m sure non-patrons are wondering if they’ll be able to get the HD version of Daniel through Gumroad. Weeellll, this kind of goes back to printing Daniel. I’ve kind of avoided that all this time because I thought I should wait until I’ve completed the fixed up and edited version of Daniel that would be for print, so that I can release THAT nice HD version of Daniel on Gumroad rather than the current HD files that are just the web version but bigger. I could release both on Gumroad I guess, but that makes me feel like I’m making people pay for basically the same thing twice (though both versions would be made available to $5+ patrons, so I dunno they’d be kind of paying for the same thing twice so maybe?? XD).

Anyway…if print Daniel happens, or heck, if it seems like it’s NOT going to be happen for whatever reason, that’s when some sort of HD digital release of Daniel will be made available on Gumroad.

In other words, I dunno when. XD But at least the web version will be free for all for the time being!

My final thoughts for now

I admit there’s going to be tumbleweeds at my sites and Patreon until I start updating Succubus again and planning whatever new comics and things, so sorry about that.

But nonetheless, as I go off to chill, thanks again everyone for reading the grave tale of Daniel Groth. It was quite the experience and I’m glad I got to share it with everyone. ^_^