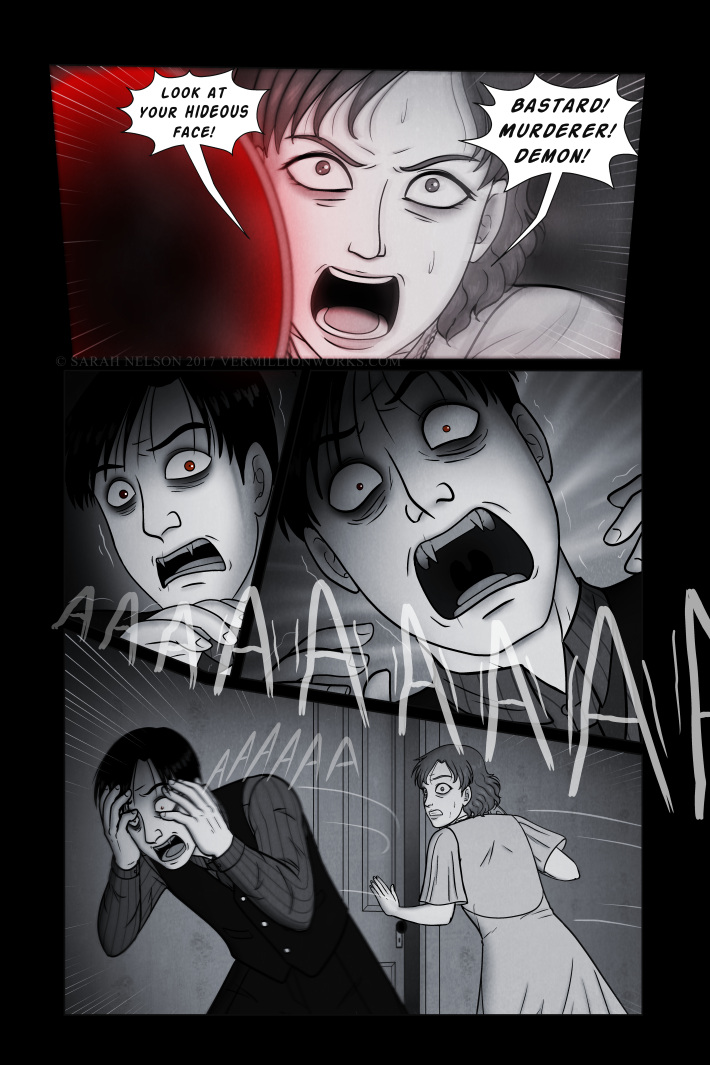 What we see in the first panel is us almost seeing Daniel’s point of view for the mirror but not quite seeing his face. Honestly, I had a bit of a mental debate of whether to show that or the faint shadow we saw before…but I thought almost seeing it would be more dramatic. Hopefully it’s that and not just very confusing.

But if you’re wondering, no, I’ll never show what Daniel sees as his face in mirrors. I never planned to. Why? Because what could I possibly show that wouldn’t be lame? What could I possibly show that could instill that amount of fear in someone? Oh, I’m sure I could’ve stuck a creepy face in there or something and you would’ve gotten the idea, but I personally think it’s better as unknown thing, left to the imagination.

The final batch of new SpiderForest comics! Read and enjoy!^^

Cosmic Fish – Acantha and her kind are monsters called “ghosts”. They aren’t part of the “life cycle”, where every living soul filters through two planetary guardians. As the different ghosts and monsters change — both emotionally and physically — they attempt find the answers behind the mystery of their existence, and either heal or run from past mistakes.

Fine Sometimes Rain – A slice of life about love, friendship, and overcoming depression.

Evil Witch Allie – Jake found a little girl claiming to be a witch wandering alone outside his house on Halloween. It would have been nice if that turned out to be the weirdest part of his night.

Paisley Brickstone – Being the new kid is never easy, but life gets even harder for Harvey Mammaroth when gym class takes a wild turn and he and his classmates find themselves trapped in an empty school. Is the whole thing just a vague assignment set up by their sadistic gym teacher, Coach Trener? Or is something much darker going on?

October 20 – After a decade of fighting the curse that has befallen them, Catherine and Raimundo have their backs to the wall. The last of their allies have been claimed by the monster that comes for them every year on October the 20th. Can they survive the day? Can they find a way to go on, even if they lose everything? And can they find the man called Shields McKloskey, who seems to hold all the answers?