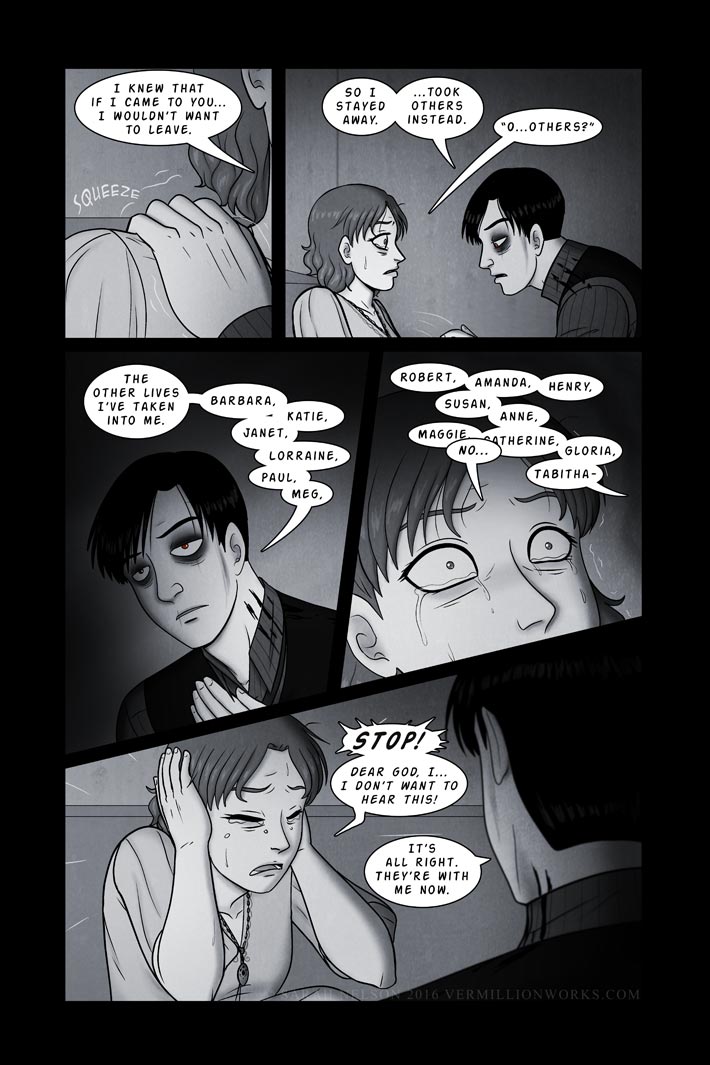 Back to regular updates (here’s hopin’ anyway!), thanks so much for your patience and concern everyone. ^__^

For the record, if I seem to respond less often in the comment section, it’s probably because I’m trying to limit my computer usage more is all. I like being an author that responds to comments, but I’m going to be trying to take it easy for a while and avoid the computer more when I’m not doing actual drawing. I’d like to keep my injuries from getting BEYOND bad again, if possible. ^^;

THE COMIC PAGE:
It’s okay, they’re with him now! =D

Daniel avoided a few important names here (Wayne, Tim, and Frank). You could say it’s because he doesn’t want to freak her out more by bringing them up, but I think it’s obvious he doesn’t care about freaking her out at this point if he’s naming off his victims like this.

Actually it’s more of a technical reason in Daniel’s mind. To him, he didn’t “take their lives into him”, he just murdered them, and before you say “but he drank Frank’s blood!” He drank a big chunk of his blood, yes, but not to the point of death – he killed him by tearing his throat out. To Daniel, he has to suck them dry to properly “consume their life” fully.

So in other words, Daniel’s still fucked up. Who knew? XP

The SpiderForest Webcomic Collective is taking applicatons until the 22nd of August for self-hosted comics!

Go take a look and consider giving it a try!