Daniel’s pupils turned back to normal in the second panel (still red though).

Also…hi, real Danny.
….and Frank, whom Daniel does not know at that time.

And speaking of, page 4 of Succubus was added! 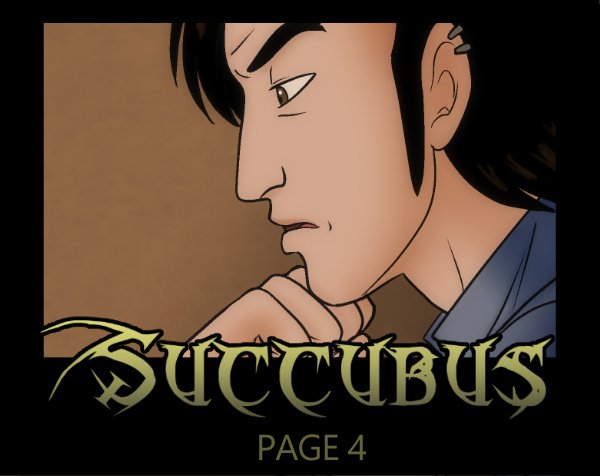 The page!
The HD page!

Black Shallows: Hadian’s world is sinking into the sea. As ever increasing amounts of land fall into the water, blame is cast on a hidden and secretive group of people whose strange ability to travel through dirt and time may be causing the devastating collapses. Hadian is one of them.

Interritus: Centuries ago, the survivors of a chemical apocalypse emerged in a world affected by radiations. Decades of gruesome war between the fire and water nations culminate in a reluctant treaty, as now both sides have a common enemy – swarms of spectre demons that destroy and take away lives regardless of power or faction.

Ten Earth Shattering Blows: Lady Landabella Trastan, a noblewoman from the rich city of Vezenia, travels across the desert with a skimpy escort. Her quest: to kill the “evil witch” that resides in the fortress of Saltfall. Her motives: unknown. What is certain is that she hugely underestimates the task. Caught between ruthless slavers and lizard-riding riders, she soon discovers that the authority of her noble status is worth nothing in a lawless, unforgiving land.

Broken: Broken is a fantasy/horror story about a psychic zombie kid befriending a fairy general and trying to deal with guilt, grief, and PTSD. This is complicated by eldritch abominations, a genocidal dictator, the dictator’s wife, and a panic-induced exit from the last known bastion of civilization.

Also, in case you missed it, the SpiderForest comics I showed off during the downtime last week!

Northwind: Angels Tiel and Iax accidentally release the Northwind, which results in their banishment to Earth. Watch as they hilariously learn to fit in with humans, dodge the Northwind, and discover a potentially earth-shattering demon plot.

The Stoop-Gallants: When Ru drunkenly discovers his necromantic powers one night, his life is irreversibly changed and he embarks on a quest to get rid of his desiccated new companion, meeting a colorful cast of knights, wizards and scholars with mysterious cheese allergies.

Ingress Adventuring Co.: Saving the world is a pretty big deal, but what do you do when no one needs you anymore? Do you become a magic professor? Do you study a convoluted thesis that no one understands? Maybe you relive the glory days by starting up a one-man adventuring party to gather mystical artifacts for people who may or may not pay you. Or, if you’re Toivo Kissa, you do all of those things.